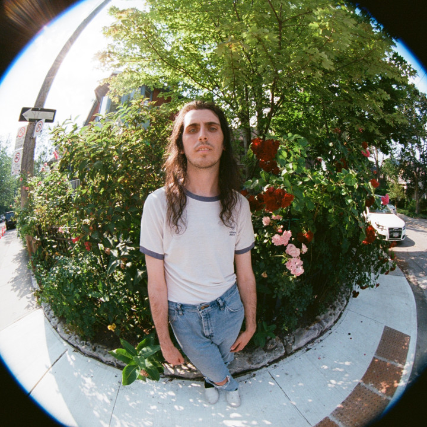 Brandon Williams makes resonant songs that capture isolation and resilience. As the songwriter behind Chastity, the Whitby, Ontario musician has made three unrelentingly perceptive albums culminating in the cathartic Suffer Summer, which is out January 13, 2022 via Deathwish and Dine Alone Records. The LP caps off an album trilogy that showcases both Williams' emotional range as a lyricist but also his boundless love of outsider music. His 2018 debut Death Lustpulled from Unwound and The Smashing Pumpkins as he grappled with mortality while 2019's Home Made Satan dealt in world-weary anxiety and Hum-like atmospherics. But Suffer Summer is a meditation on happiness, channeled through powerhouse riffs and undeniably potent choruses, sung with Mineral and Jimmy Eat World worn on his sleeve. It's an album that shows how healing and staying content is hard but necessary work.

Williams mostly wrote Suffer Summer throughout 2019 while he and his band joined acts like Fucked Up, DIIV, and Alexisonfire on tour. It was a fruitful and exciting period for Williams, who whittled down 24 new tracks to 10, taking several new creative leaps while penning these songs. Take "Happy Face," the first song Williams wrote for Suffer Summer and his most autobiographical offering to date. Written as a tribute to his longtime friend who died of an overdose, Williams sings, "You and I were alive at the same time / I'm lucky for it / You showed me the Misfits and we sang Out 'Last Caress' / I'm lucky for it." It's raw and gutwrenching in a way that Williams has never allowed himself to be but writing about grief proved to be cathartic for him. "Until now I've always tried to keep a safe arm's length away from the real-life content of my songs but on that song, I couldn't," said Williams. "It was just a needed tribute to him."

For any artist, taking risks, trusting your intuition, and relinquishing control is a delicate balance but for these songs, Williams knew he needed to step out of his comfort zone by making his writing more collaborative. He enlisted one of Chastity's earliest and most vocal supporters PUP frontman Stefan Babcock to co-write opener single "Real World" and LP highlight "When You Go Home I Withdrawal." Both songs find Williams stretching his voice for surging choruses that are anthemic and immediate. "It was so great to work with Stefan: just his attention to detail, song structure, and everything," said Williams. "He's a legend and has pumped my tires so much in an actual practical way that has given me courage throughout Chastity."

Babcock isn't the only surprise collaborator on this LP. Alexisonfire and City and Colour's Dallas Green appears as a guest vocalist on "Vicious Circle," the emotional centerpiece of Suffer Summer. The song, which Williams co-wrote with his partner Ellis' Linnea Siggelkow, boasts some of his best writing ("Borrowing an old feeling to cover the pain / Can't keep memories of only the good things,") and when Green joins to sing the second verse, it makes for the most transcendent moment on the LP. "After we put strings on this song it was just too damn beautiful for my voice," said Williams. "Dallas' voice reached right into that beauty. Recording this was the single most surreal and sentimental moment of the project for me I think, with how formative Alexis was for me." Green also collaborated on the shimmering single "Somersault" in an unexpected way. "He sent me a voice memo called 'Pumpkins?' and offered it as a Chastity riff," said Williams. "It was sludgy but we sped that up into this up-tempo, brighter verse riff that'd become this song: it went from 'Bullet With Butterfly Wings' to 'Today.'"

Suffer Summer was recorded throughout 2020 in fits and starts, with Williams returning to the studio to hone the LP. One song that came together during this time was the single "Pummeling," another exercise in Williams expanding his creative palate. "'Pummeling' was a place I was afraid to go," said Williams. "I've been so focused on my music being challenging, technical, and correct. But on this, I wanted to allow myself to go simple, out of my comfort zone." The result is undeniably accessible but look below the surface of the welcoming hooks and you'll find some impossibly dark lyrics. "Same thing every day / I run from feeling fucked til it's jumping me," sings Williams. This juxtaposition is where Chastity thrives.

Chastity started as a way for Williams to find community in his suffocating and isolating suburban life, his songs serving as an outstretched hand for the like-minded people on the fringes. The long-lead single "Dying to Live," encapsulates this ethos when Williams sings, "Another sick person just trying to get well / You, me, everyone I know." Like all of his music, this song comes from his hometown, in these places graffitied with memories for him: pain, loss, grief, but ultimately acceptance. "We've all been sick this last year and a half: Everyone I know is feeling fucked," said Williams. "We survive through each other, through being close with each other and finding community and a sense of purpose in our friendships." Suffer Summer is both a validation and comfort that while the world might be irrevocably fucked, you're not alone.